B-Tree and its variants data structures are widely used in storage systems, database systems, mainly as indexes for dynamic random access data scenarios. google/btree (github.com) is a pure in-memory B-Tree implementation written in Go, and its source code is analyzed in this paper.

Organization and maintenance of large ordered indices This paper presents the B-Tree data structure. The query of B-Tree starts from the root node and performs a dichotomous lookup of the ordered data within the node and ends the query if it hits, otherwise it goes to the child node query up to the leaf node.

The characteristic of B-Tree query is that the search may end at a non-leaf node. As a typical tree structure, it contains the following node types.

The structure of a B-Tree is shown in the figure above. A non-empty B-Tree with height h and minimum degree k has the following properties.

btree provides the basic CRUD APIs. The comments describe the functionality of these interfaces in detail, and you can Google many articles about the use of btree. Therefore, only a few key APIs are listed to facilitate understanding of the following.

The Item interface needs to be implemented before data can be inserted into the btree, and this interface contains only one Less method, which is used to sort all the data in the btree in increasing order.

Passing values through the interface is a layer of abstraction for data compatibility across data types, rather than serializing data into byte slice for storage. The disadvantage is that type assertions and conversions are required each time the value is read, but usually the API is wrapped in a layer so that the caller does not have to pay attention to this content.

For example, in the following code example, the foo structure has three internal fields and implements the Less method, which can be considered a less-than < operator. a and b are both its two entity objects, and the structure does not manually implement the == operator. Although they have different variable values and memory addresses, they satisfy the condition ! (a<b) && ! (b<a), then a and b can be considered equal.

Specifically in the query method implementation of the btree, a dichotomous lookup is used to find the first value that satisfies the (item < s[i]) condition. This means that (item < s[i-1]) is not valid (the value is false), and then (s[i-1] < item) is judged again, and if it is not valid either, then item is considered equal to s[i-1].

The data structure of btree is relatively clear, containing the minimum degree degree of the B-Tree, the number of data entries stored length, and the root node root. Each node contains its own child nodes and data entries.

btree does not distinguish between different types of nodes, they are uniformly represented as node to reuse the code for node operations. If the node is a leaf node, then its children field is empty.

copyOnWriteContext is a structure held by every node in the btree, and as you can see from the name, it is a copy-on-write related content. Since btree is a pure memory implementation, when we copy the original btree using the Clone() method provided internally, the new tree and the old tree will share the same memory space using the copy-on-write technique, thus saving memory overhead and the time needed to copy the data. Only when a node is to be written to is a new node actually created.

The Redis RDB persistence also uses COW technology, where the Redis master process forks out the child processes for data backup, and the parent process continues to provide services to the outside world. The child and parent processes only have different virtual spaces, but the corresponding physical spaces are the same, which is similar to the Clone() method. The difference is that btree’s copy-on-write directly shares the virtual memory address.

Taken as a whole, copyOnWriteContext has two roles.

copyOnWriteContext is an important means for btree to optimize memory overhead, reducing the frequency of memory requests and destruction from both reuse/shared memory perspectives, and using copy-on-write to share the same data in high-volume data replication scenarios.

ReplaceOrInsert inserts a new piece of data into the btree, replacing the old value with the new one if it already exists. The implementation of this interface removes the boundary condition handling and essentially calls the internal insert method to insert the data.

The execution path of the insert method is as follows.

The following judgments are required when deleting data from a B-Tree node.

The btree supports incremental/descending range queries, in the case of incremental queries, this is a standard iterative BFS implementation and iterates over the values with the ItemIterator function passed in by the caller.

The following is etcd’s wrapped btree code. Since btree supports concurrent reads, but only serial writes, a read/write lock is added to treeIndex, which is not described in detail in this article.

The Google implementation of btree has many points to consider, using write-time copy and recycle lists to reduce memory overhead and reuse the underlying code as much as possible, and the overall design is very clean.

From the above, we know that the performance of B-Tree lookup is unstable, with the best case being only the root node and the worst case being the leaf node. And as an ordered combination of data, its range query performance is not good either. Therefore, an improved data structure B+Tree is proposed based on the B-Tree. 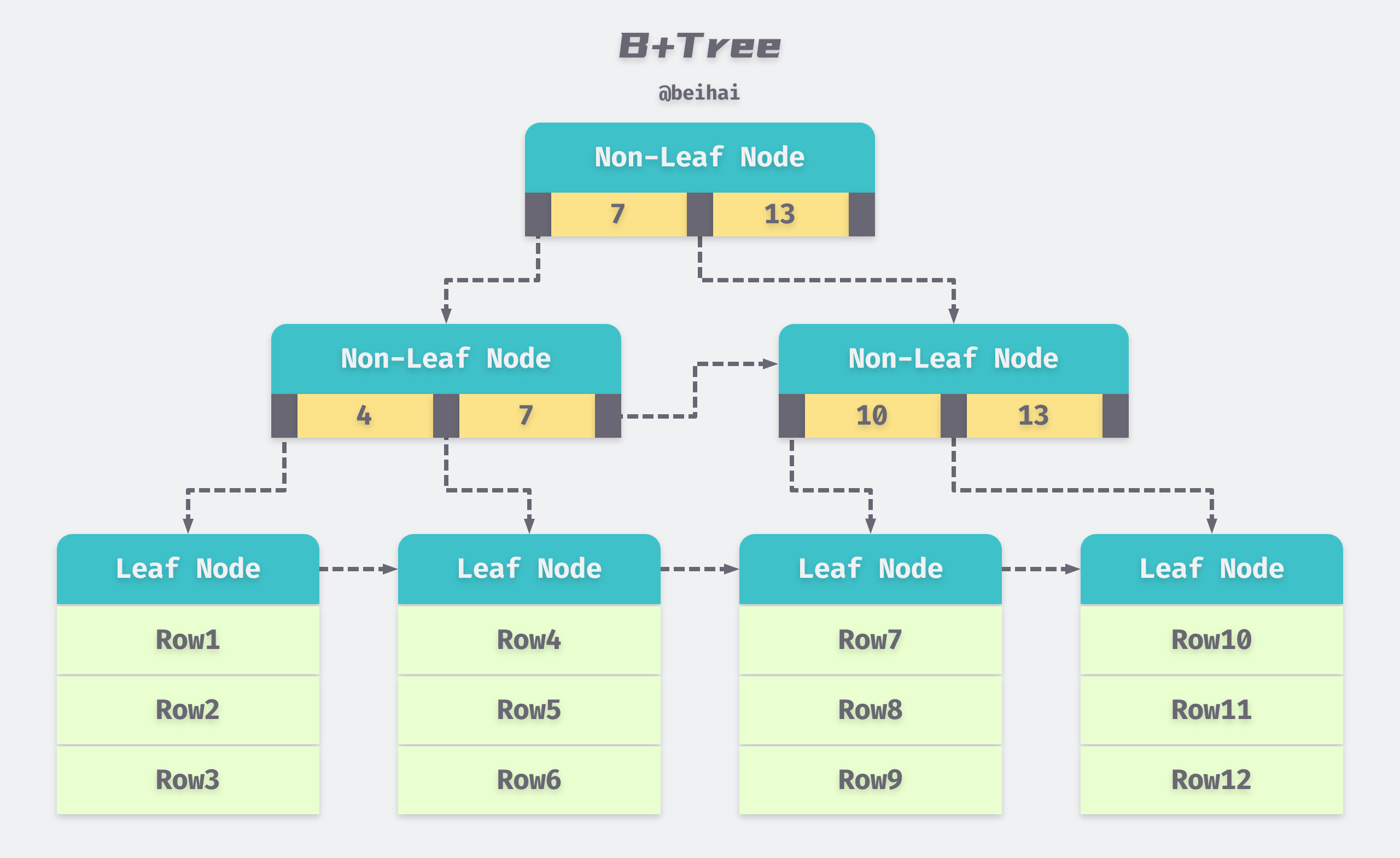 Another advantage of the B+Tree is that a non-leaf node of the same size can be indexed to more child nodes because the non-leaf nodes do not store data, only the key and a pointer to the child nodes. For example, if we implement a disk-based indexing system with a fixed size of 16KB per node and 1KB per piece of data, with a unit64 integer as the primary key and a unit64 pointer to a child node, that is, a node can store 16 pieces of data. Then the B+Tree with height 3 has 1 root node in the first layer, 1,000 nodes in the second layer (16 Bytes for a primary key and a pointer), and 1,000,000 nodes in the third layer, which can store about 16 million pieces of data. The B-Tree has only 16 nodes in the second layer and 256 nodes in the third layer, which can only store 4096 data, so it takes 6 layers to store 16 million data.

From the above example, we can see that in the case of tens of millions of data, without considering caching nodes in memory, B-Tree requires at worst 6 I/Os to query the data, while B+Tree is stable at 3 I/Os.

Therefore, in my opinion, B-Tree has no advantage in disk-based storage systems for either single-value queries or range queries, and in pure in-memory storage, B-Tree is only suitable for infrequent range queries.