The two core issues that need to be addressed by container networks are as follows.

CNM is based on libnetwork, a model specification built into docker, and its general architecture is shown in the figure below.

As you can see, the CNM specification defines the following three main components.

As you can see, the underlying implementation principle is still the Linux virtual network device, network namespace, etc. that we introduced before. the typical scenario of CNM specification is like this: users can create one or more Networks, a container Sandbox can join one or more Networks through Endpoint, containers in the same Network Sanbox can communicate, and the container Sandbox in different Network is isolated. This allows decoupling from containers to networks, i.e. locks, before creating containers, you can create networks and then decide which network to let containers join.

CNI is not natively supported by docker, it is a generic network interface designed for container technology, so the CNI interface can be easily called from the top to the bottom. However, getting from the bottom to the top is not as easy, so some common CNI plugins are difficult to activate at the docker level. However, both models support plugging, which means that each of us can write our own specific network implementations according to both sets of network specifications.

The network models natively supported by docker via libnetwork can be listed via docker network ls.

As you can see, the bridge network model relies heavily on the famous docker0 bridge and the veth virtual network device pair, and from our previous notes on Linux virtual network devices, we know that packets sent from one veth device pair will be sent directly to the veth device at the other end, even if they are not in a network namespace. space. So a veth device pair is actually a “network cable” that connects different network namespaces. docker0 bridge devices act as gateways to different container networks. In fact, once we create a container in bridge network mode, the corresponding veth device pair is automatically created, with one end connected to the docker0 bridge and the other end connected to the eth0 virtual NIC of the container network.

First we look at the bridge device docker0 and the routing rules on the host where docker is installed.

Then create a container using the default bridge network model and look at the veth device pair on the host side.

You can see that one end of the new veth device pair, veth42772d8, is already connected to the docker0 bridge, but what about the other end?

Note: If we create a symbolic link /var/run/netns/ that maps to /var/run/docker/netns/, we don’t have to use the nsenter command or go inside the container to see the other end of the veth device pair. You can view it directly using the iproute2 toolkit below.

We will then simulate the implementation of the bridge network model. The basic network topology is shown below. 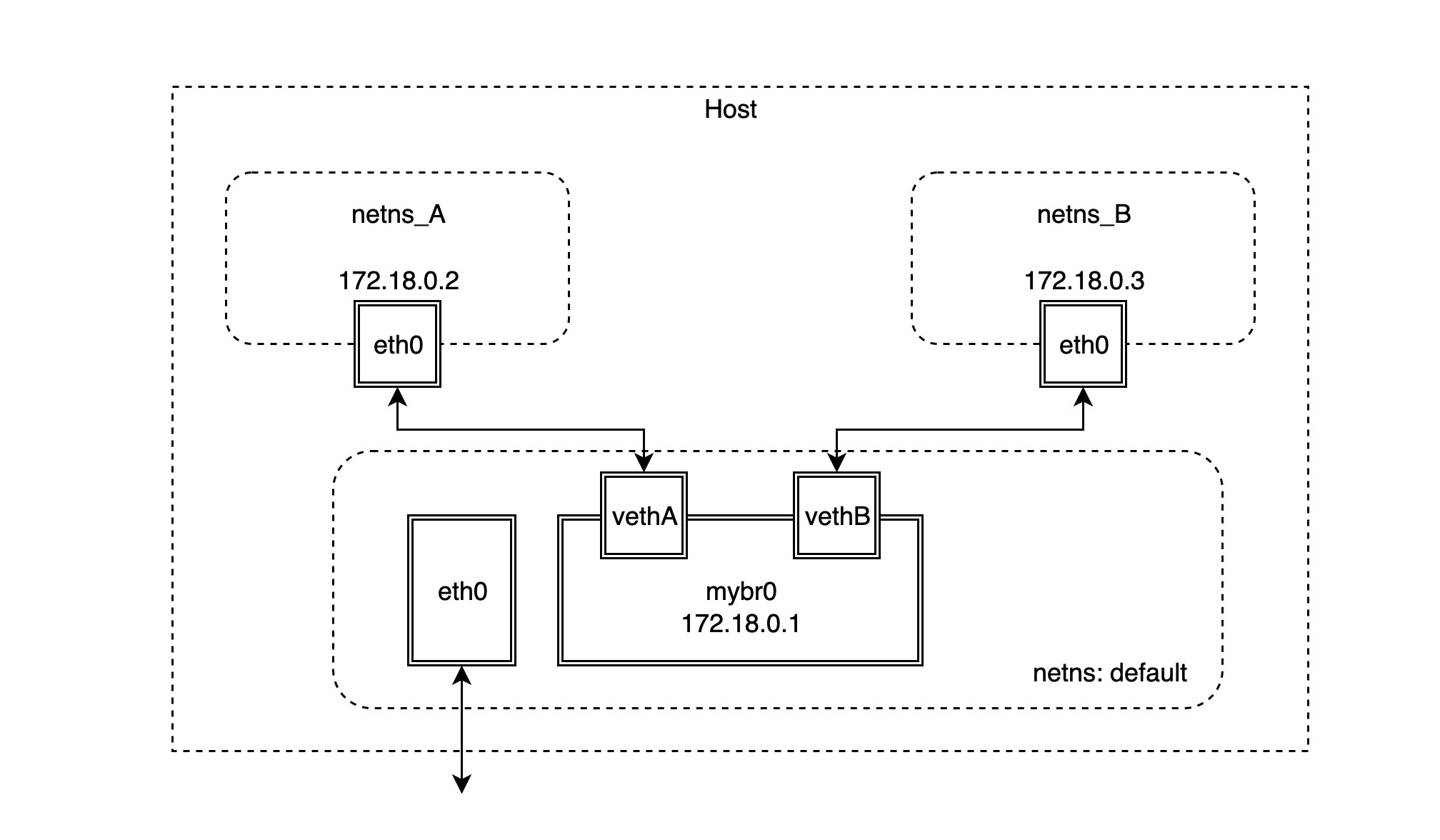 In fact, the two network namespaces are in the same subnet at this point, so the bridge device mybr0 is still working at layer 2 (data link layer) and only needs the MAC address of the other party to access it.

But if you need to access addresses in other network segments from both network namespaces, this is where the bridge device mybr0 set as the default gateway address comes into play: packets from both network namespaces find that the destination IP address is not the address of the local subnet and are sent to the gateway mybr0. At this point, the bridge device mybr0 is actually working at layer 3 (IP network layer), and after it receives the packet, it looks at the local route and the destination IP address to find the address of the next hop.