For the inter-host container access problem, we can think of the most intuitive solution is to use the host network directly, in this case, the container completely reuse reuse the host network equipment and protocol stack, container IP is the host IP, so that, as long as the host host can communicate, the container will naturally be able to communicate. However, in order to expose container services, each container needs to occupy a port on the host, through which the port and the outside world communication. Therefore, it is necessary to maintain the port assignment manually, and it is not possible to make different container services run on one port, because of this, this container network model is difficult to be extended to the production environment.

Therefore, the feasible solution for cross-host communication is to let the container configure a different IP address from the host, often on top of the existing layer 2 or layer 3 network and then build up a separate overlay network, which usually has its own independent IP address space, switching or routing implementation. Since the container has its own independently configured IP address, the underlying network devices such as switches and routers in the underlay plane do not sense the existence of these IPs at all, which results in the container’s IP not being directly routed out to achieve cross-host communication.

In order to solve the problem of access between container independent IP addresses, there are two main ideas.

Before we start, let’s summarize some of the various technical terms we often see inside the introduction to container networking articles.

docker natively supports overlay networks to address cross-host communication between containers. In fact, Laurent Bernaille at DockerCon 2017 broke down the implementation of the overlay network natively supported by docker, and even has a step-by-step tutorial on implementing the network model from scratch, which The three articles are listed below.

So here I’ll just give a general overview of how the docker native overlay network model works. 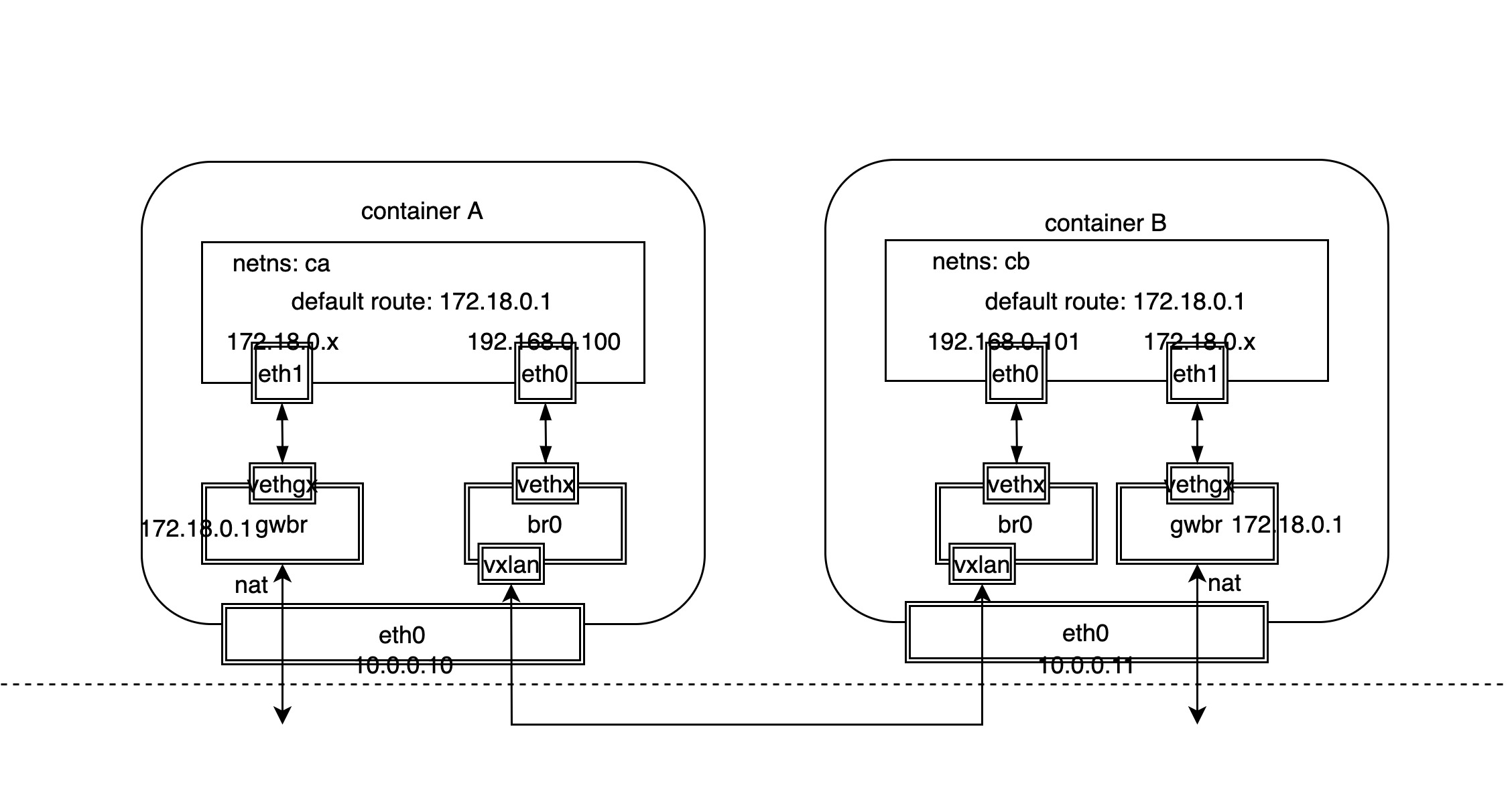 As you can see from the above network model diagram, for docker native overlay network, different Linux network devices are used to handle the north-south traffic for outbound container access and the east-west traffic for inter-container access.

It should be noted that although two containers across hosts are communicating through the overlay network, the containers themselves cannot sense it because they only think that they are in a subnet with each other and only need to know each other’s MAC addresses, and can learn to get IP and MAC address translation by broadcasting through ARP protocol. Of course, there is no problem in theory to broadcast ARP packets through VxLAN tunnel, the problem is that this scheme will lead to too many broadcast packets and the cost of broadcasting will be very large.

The solution given by docker is to solve the ARP broadcast problem by ARP proxy + static configuration, where the address information of containers is saved to the KV database etcd. This replaces the use of ARP broadcast by populating the IP and MAC address tables (neigh tables) with static configurations, so the VxLAN device is also responsible for the local container ARP proxy.

PERMANENT in the above neign information represents static configuration rather than acquired through learning. And 192.168.0.103 and 192.168.0.104 are the IP addresses of the other two containers. Whenever a new container is created, docker updates the local neigh information table by notifying the node.

In addition, packets between containers are eventually transmitted through VxLAN tunnels, so it is necessary to know which node is the target container of the packet. When the number of nodes reaches a certain order of magnitude, if the same broadcast flooding as ARP is used to learn, then obviously there are also performance problems, and in practice, this solution is rarely used, in the hardware SDN usually use BGP EVPN technology to achieve the control plane of VxLAN, and docker solution is similar to ARP, through the static configuration of the way to populate the VTEP ( VxLAN Tunnel Endpoint) table by static configuration, we can see the forwarding table of container network namespace (FDB: Forward DataBase).

Flannel is one of the most dominant container network implementation models, supporting both overlay and modified host routing modes.

Unlike docker’s native overlay network, where all nodes share a single subnet, Flannel is typically initialized with a 16-bit network and then each node is assigned a separate 24-bit subnet. Since the nodes are all on different subnets, cross-node communication is essentially a Layer 3 communication, and there is no Layer 2 ARP broadcast problem.

In addition, what makes Flannel so simple and elegant is that unlike docker’s native overlay network, which requires a bridge device inside the container dedicated to overlay network communication, Flannel uses only docker’s most native docker0 network, which requires little change to the The original docker network model is virtually unchanged, except for the need to configure subnets for each node. 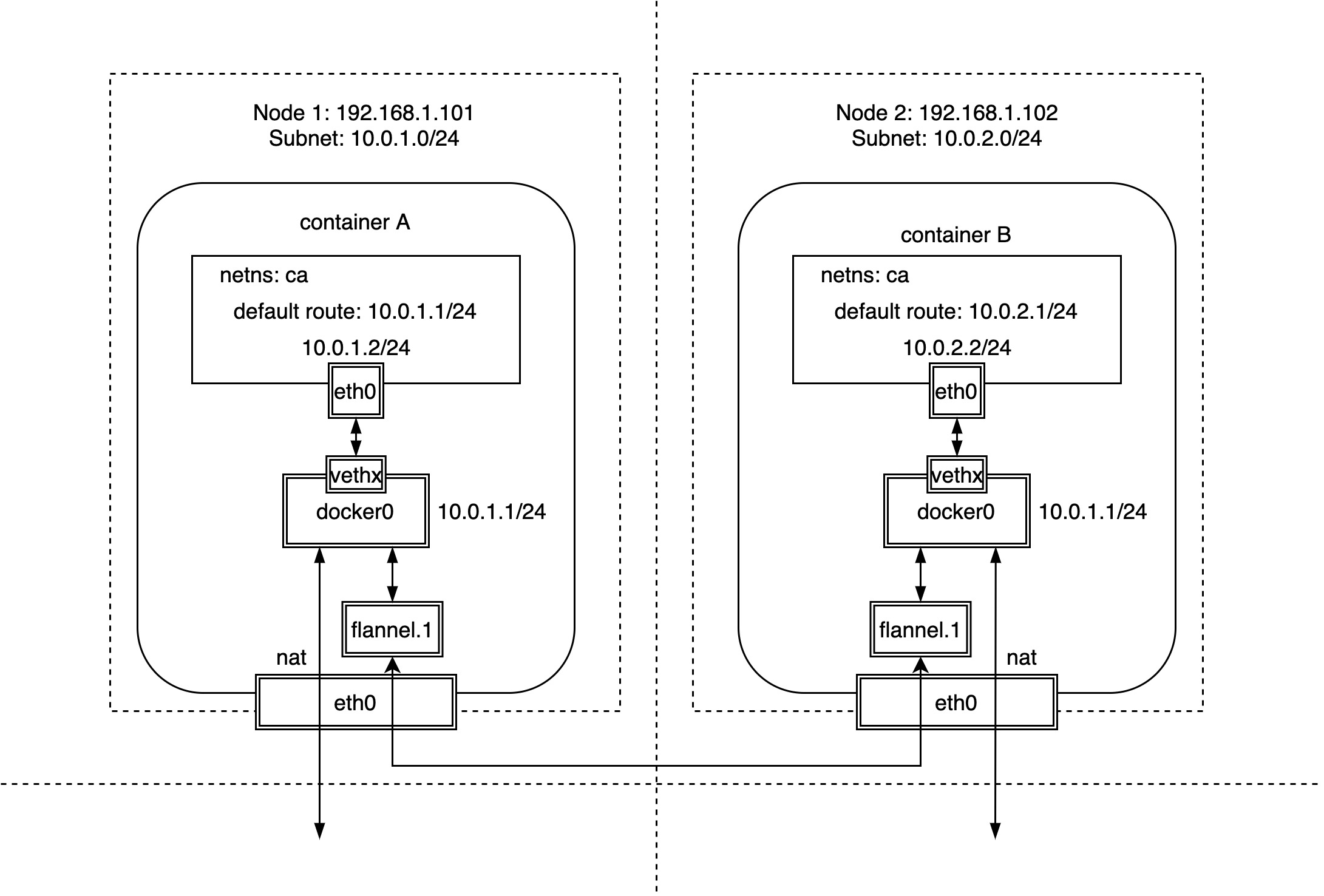 As you can see in this diagram above, Flannel assigns a separate subnet to each node based on docker’s most native docker0 bridge device and veth device pair.

We can also see that access to containers for external traffic and access between containers on the same host is exactly the same as docker’s native bridge mode. So, how do we access containers across hosts?

As mentioned earlier, Flannel provides both “overlay” and “modify host routes”. The overlay method is mainly through VxLAN tunnels, while modifying host routes is done by configuring static host routes.

As you can see, for each host, the current subnet can be accessed directly through the docker0 bridge, while the other subnets require a special network device flannel.1, which is a Linux VxLAN network device, where .1 is the VNI value and the default value is 1.

Because containers on the same host are on the same subnet, they can be obtained directly by ARP learning, while containers on different hosts are on different subnets, so there is no ARP broadcast flooding involved. However, how does the VxLAN network device flannel.1 know the VTEP address on the other side? Let’s take a look at the forwarding table FDB.

Where 192.168.1.102 is the IP address of the other node, the VTEP address, and 82:fa:1d:48:14:00 is the MAC address of the peer network device, flannel.1. As you can see from permanent, the forwarding table is added statically by Flannel, and this information can be stored in etcd.

Compared to docker’s native overlay network, the creation and deletion of containers does not require Flannel intervention at all, except for adding or deleting nodes, which requires Flannel to configure static routes and forwarding tables to the FDB, and in fact Flannel does not need to know if new containers are created or deleted.

We’ll have a chance to go into more detail about Flannel’s “host-gw modify host route” implementation later. It should be noted that the host-gw approach is better than the overlay approach because it eliminates the VxLAN packet unpacking process and routes packets directly to the destination address. However, because it is achieved by adding static routes, each host is equivalent to the gateway to the container, so each host must be in the same subnet, otherwise the cross-subnet due to “link-layer inaccessible” resulting in the failure to achieve routing.

Calico uses a similar approach to Flannel “modify host route host-gw” for cross-host communication between containers. The difference is that Flannel adds host static routes one by one through the flanneld process, while Calico broadcasts through the BGP protocol for mutual learning of routing rules between nodes.

Calico dynamically adjusts routes via BGP protocol, so let’s take a look at the routing rules for hosts.

As you can see, Calico modifies host routing to achieve cross-host communication between containers in the same way as Flannel host-gw, where the next hop is directed to the IP of the corresponding host, using the host as the gateway to the containers. However, Calico adds a blackhole rule to discard access packets to illegal container IPs. Another difference is that once the packet reaches the host, Flannel forwards the traffic through the route to the bridge network device, which forwards it to the container, while Calico generates a routing rule for each container IP that points directly to the container’s NIC counterpart. When the number of containers reaches a certain size, the number of host routing rules will also increase, and performance will be an issue, Calico’s solution is a route reflector.

In addition, it is important to note that we know that the Flannel host-gw approach only supports adding static routing rules if each host is on the same subnet, and cannot support hosts across network segments, so does Calico support that?

The answer is yes. Calico can be installed with or without ipip mode, which means ipip tunneling. In my experimental environment, ipip mode is turned on, and if you look closely enough, you will see that the host routes to containers on other hosts go through the tunl0 network device, so let’s take a look at the type of tunl0 network device.

As you can see, tunl0 is actually a TUN network device for Linux, it will open IPIP tunnels between different host nodes, which means that even if the host node is in a Layer 3 network, packets can still be sent to the target host through the tunnel, and then forwarded by the target host to the corresponding container, at this point Calico actually uses the overlay implementation.