Domestic smart device maker UMIDIGI has sparked controversy by violating the GPLv2 agreement and telling developers to “pick up the source code if you want it”. The incident has already caused a lot of controversy among foreign netizens.

UMIDIGI is a Shenzhen-based smart device manufacturer that sells affordable Android smartphones and smart wearables. As you can see from Amazon, it focuses on the sub-$200 phone market and the sub-$50 smartwatch market, with its current top-selling product being the UMIDIGI A7 Pro smartphone, which costs $150.

Recently, Polish developer Patrycja has sent an email to UMIDIGI asking them to release the kernel source code of their UMIDIGI F2 phone (based on Android 10), in particular the “ft8719_dsi_fhdplus” display/screen driver. Since the Linux kernel used in Android is based on the GPLv2 open source agreement, any changes made to the source code by the developers are also required to be open source according to this agreement.

According to a screenshot of the email from developer Patrycja, a UMIDIGI employee calling himself Ben said in the reply that Patrycja could come to their Shenzhen office during working hours to request the source code, and in the email Ben specifically emphasized that their employees only speak Chinese and included the company’s address. 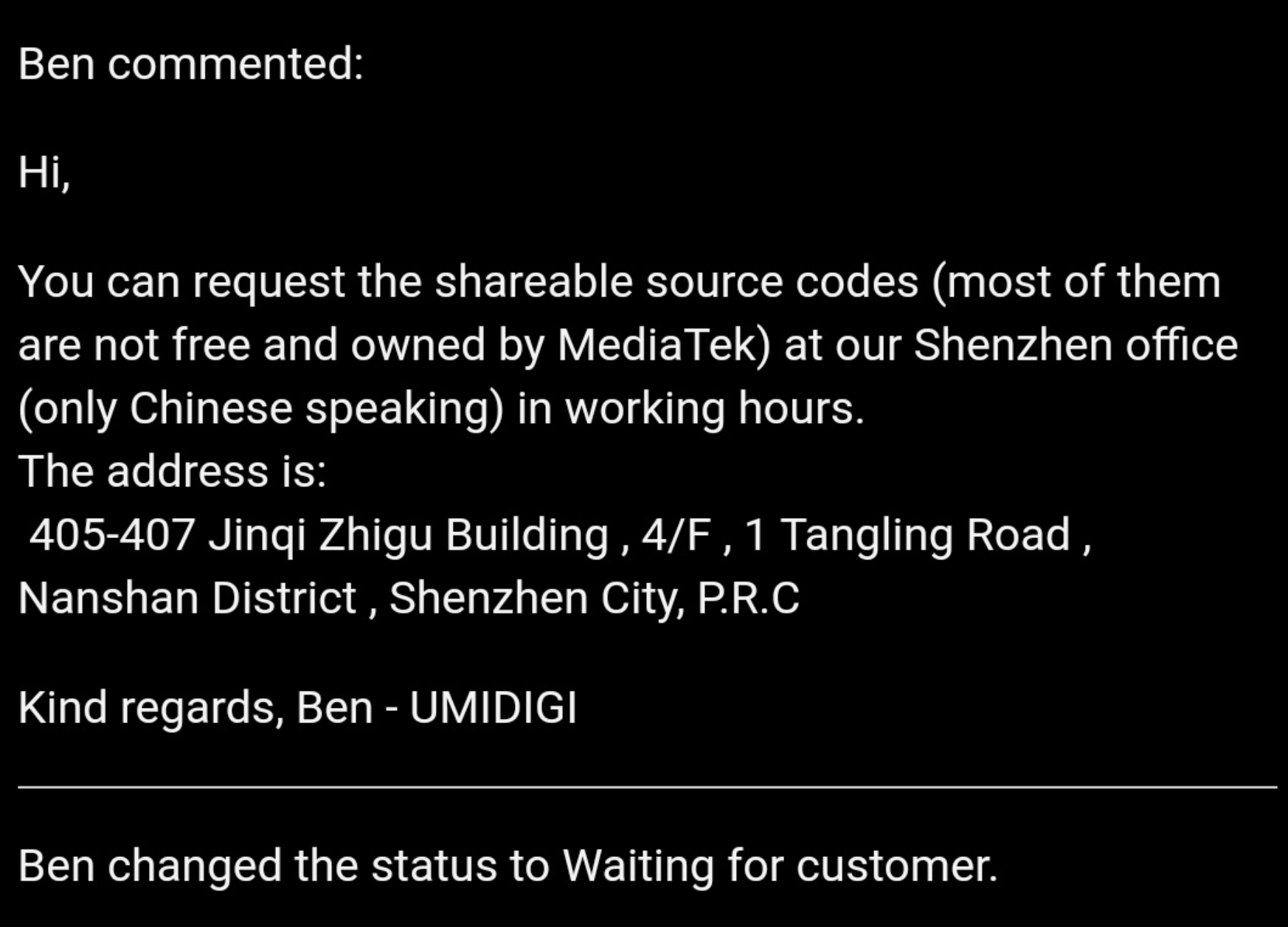 Some industry insiders point out that this practice is usually a way of stonewalling foreign developers, setting a higher barrier to access by having developers come in person and by not providing foreign language services, thus allowing developers to voluntarily drop the matter. The follow-up can also say that it is not the company itself does not open source this project, but you do not come to take.

It is worth mentioning that after reminding the well-known technology blogger Naomi Wu (机械妖姬) willing to help, really ran to UMIDIGI’s office to help Patrycja to obtain the kernel source code, and put the process into a video on the Internet. In the video, Naomi Wu directly asks the UMIDIGI staff present who Ben was who sent the email, and hopes to get the kernel source code he needs. However, the employees present said that Ben had left the company a long time ago, and that no one could come forward to take responsibility or provide documentation for the incident, even after repeated questions. (Original video link) There are also users who don’t forget to “reopen old scores”, as there was a Chinese vendor Onyx that was criticized for ignoring the GPLv2 protocol and even raised to the national level. We hope Naomi Wu will pay a visit to Onyx after this incident.

Of course, more netizens are still looking forward to the subsequent development of the situation with the mindset of “watching the fun”. It is reported that the complete video content will be released in the near future, we will continue to pay attention to this matter.