The specific issue to be analyzed today is ‘why DNS uses the UDP protocol’. DNS acts as a phone book for the entire Internet, translating domain names that can be understood by humans into IP addresses that can be understood by machines, eliminating the need for users of the Internet to have direct access to IP addresses that are difficult to read and understand.

The two problems we are about to discuss are not conflicting, in most cases DNS uses the UDP protocol for communication, and the DNS protocol was designed to recommend that we use UDP first for domain name resolution, which does solve many needs, but not all.

In fact, DNS uses not only the UDP protocol, but also the TCP protocol, but before we get into the specifics of today’s issue, let’s give a brief introduction to the DNS protocol: DNS queries contain not only common queries such as A records and CNAME records, but also special queries of the AXFR type, which are mainly used for DNS zone transfers, which is used to quickly migrate records between multiple nameservers. Since the response returned by the query is relatively large, the TCP protocol is used to transfer the packets.

As a widely used protocol, we can find a lot of DNS-related RFC documents, DNS Camel Viewer lists nearly 300 RFC documents related to DNS protocol, among which 6 are current Internet standards and 102 are DNS-related proposals. These documents together constitute our current understanding of the design of the DNS protocol, and the author has not been able to read them one by one, and has only selected some of the important documents to help us understand the history of DNS and its relationship with the UDP/TCP protocol, and will only excerpt from the documents related to the UDP/TCP protocol.

To briefly summarize the history of DNS, the original version of the DNS protocol was defined in 1987 by RFC1034 and RFC1035 The DNS was designed to use both UDP and TCP protocols, with UDP datagrams being used for most DNS queries and TCP protocols being used only in zone transfer scenarios, where UDP packets would only transmit a maximum of 512 bytes of data and any excess would be truncated; two years later, RFC1123 was released. tools.ietf.org/html/rfc1123), published two years later, predicted that more and more data would be stored in DNS records, and for the first time explicitly stated that UDP packets should be retried via TCP when they were found to be truncated.

The DNS extensions provided by RFC6891 helped to address the problem of truncated large packets to some extent, reducing the need for retries using the TCP protocol, but this did not solve all the problems due to the maximum transmission unit limit.

It was more than 30 years after the advent of DNS that RFC7766 finally proposed the use of TCP as the primary protocol to solve problems that UDP could not, and TCP was no longer just a mechanism to be used for retries, followed by DNS over TLS and The subsequent DNS over TLS and DNS over HTTP were also a complement to the DNS protocol.

From this development, DNS does not only use UDP packets for communication, but also the TCP protocol has been seen in the DNS standard, and we would like to analyze it today from a historical point of view - “why DNS queries choose to use UDP/TCP protocol”.

In this section, we will present in two parts what are the advantages and disadvantages of the two different protocols, UDP and TCP, in supporting DNS queries and responses, depending on the protocol used for DNS, and during the analysis we will also restore the scenarios when making design decisions, taking into account the historical context.

The UDP protocol has been the primary protocol used by DNS for decades, and as an Internet standard, the majority of current DNS requests and responses use the UDP protocol for data transmission.

The data of DNS requests are encapsulated in binary form in the UDP packet as shown below, the following is a request to call the DNS server to obtain the IP address of the www.baidu.com domain, starting from the 05 byte in the fourth line to the end is the content of the DNS request, the entire packet contains Ethernet, IP and UDP protocol headers in addition to DNS protocol-related content. IP and UDP protocol headers.

Although each UDP packet contains many Ethernet, IP, UDP, and DNS protocol-related elements, the DNS request above is only 73 bytes in size, and the response to the above DNS request is only 132 bytes, which is a very small packet for other common requests today.

The communication mechanism between UDP and TCP is very different. As a reliable transport protocol, TCP requires three handshakes to establish a TCP connection between the two communicating parties before they can communicate, but in the 30-year-old DNS query scenario we don’t really need a stable connection (or think we don’t), each DNS query sends UDP datagrams directly to the nameserver, and at the same time the packets of common DNS queries are very small, and TCP connection establishment brings the following additional overheads.

Assuming that the time consumed by network communication is negligible, if we consider only the data transferred when a TCP connection is established, we can make a simple calculation. 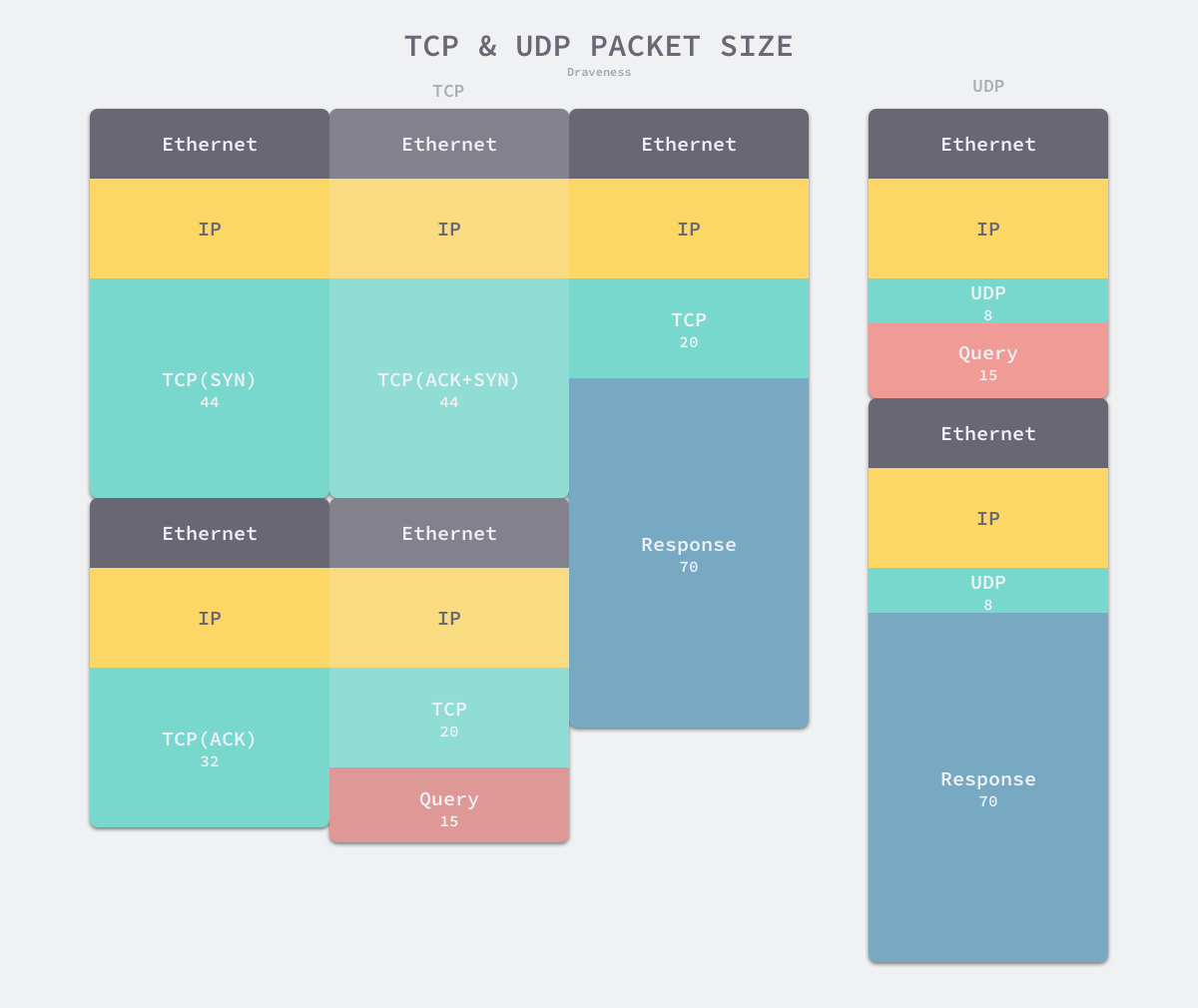 Note 1: The overhead of TCP headers is request and environment specific, and the exact result may fluctuate slightly in size to about 120 bytes.

Note 2: We calculate the results here on the assumption that a DNS resolver needs to communicate with only one nameserver or authoritative server to obtain a DNS response, but in real-world scenarios, DNS resolvers may communicate recursively with multiple nameservers, which doubly magnifies the disadvantage of the TCP protocol in terms of additional overhead.

If the request body and response of a DNS query are 15 and 70 bytes respectively, TCP will add ~250 bytes and ~145% additional overhead compared to UDP protocol, so when the size of the request body and response is small, transmission via TCP protocol not only requires more data to be transmitted, but also consumes more resources, and the time cost of multiple communications and information transmission cannot be ignored when the DNS query is small, and the reliability brought by TCP connection does not play a big role in the DNS scenario.

Today’s network is not as simple as it was designed to be decades ago. Not only are we experiencing the impending unavailability of IPv4, but we also need to introduce mechanisms such as DNSSEC to ensure the integrity of DNS queries and requests as well as transmission security. Why do we have to use the TCP protocol when more data needs to be transferred? If we continue to use the UDP protocol, can’t we do DNS resolution.

In theory, the size of a UDP packet can reach up to 64KB, which is actually a very large value for a common DNS query; however, in practice, once the data in a packet exceeds the maximum transmission unit (MTU) of the transmission link, which is the upper limit of a single packet size, usually 1500 bytes, the current packet may be fragmented and discarded, and some network devices may even refuse to process requests containing the EDNS(0) option, which can lead to DNS instability using the UDP protocol.

TCP, as a reliable transport protocol, can solve this problem very well. Through mechanisms such as sequence numbering and retransmission, it can ensure that the message is not heavy or missing, and the TCP stack of the message recipient will reassemble the fragmented data, and application layer protocols such as DNS can directly use the processed complete data. At the same time, when the packet is large enough, the percentage of additional overhead from the three TCP handshakes becomes smaller and smaller, converging to zero compared to the size of the entire packet: * When the DNS packet size is 500 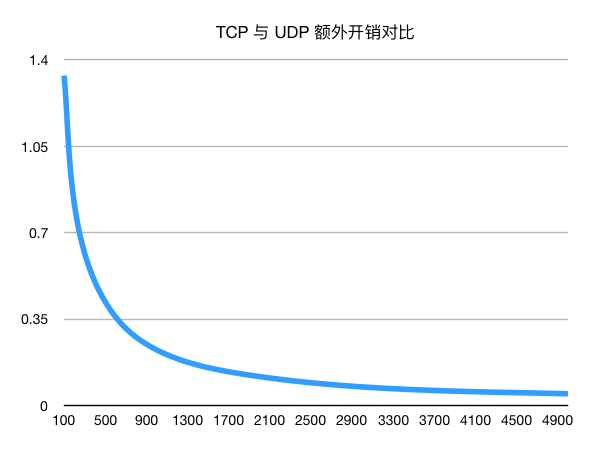 So, when we store more content in DNS, the three TCP handshakes and the additional overhead from the protocol headers are not a critical factor, but there is still no way to avoid the three network transfer times from our three TCP handshakes, which is something we have to accept in the current scenario.

Many people believe that DNS uses the UDP protocol to obtain the IP address corresponding to a domain name.

Whether we choose UDP or TCP, the core conflict lies in the size of the packets to be transmitted. If the packets are small to a certain extent, the UDP protocol is definitely the best choice, but when the packets gradually increase until they break the 512-byte and MTU 1500-byte limits, we can only choose to use the more reliable TCP protocol to transmit DNS queries and corresponding. Finally, let’s look at some of the more open-ended related issues, and the interested reader can ponder the following questions.